…
For a better experience please change your browser to CHROME, FIREFOX, OPERA or Internet Explorer.

The interconnecting transformer which was built by the Ghana Grid Company Limited Ghana Limited and Asogli cost 5.4 million dollars.

The project, which has commenced full-scale operation involves the installation of a 200MVA Autotransformer to facilitate evacuation of about 120MVA additional generation capacity from the Sunon Asogli power plant onto the grid.

It will also provide flexibility in system operation by allowing power transfer between the 161 kV and 330 kV networks, thereby ensuring stable and reliable transmission of power.

The added generation capacity being made accessible through the project will further make about 1,500 gigawatt hours of electricity available per year to the national grid. 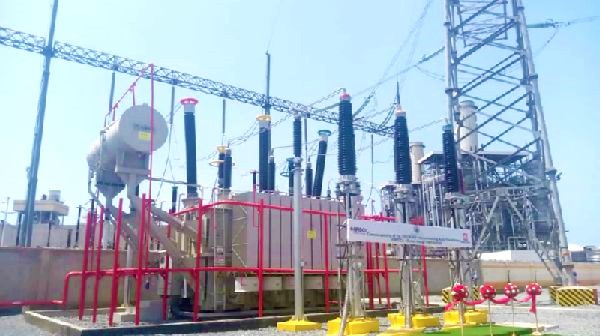 Speaking at the inauguration ceremony of the project in Tema on Friday, the Minister stated that the project was borne out of necessity and rapid development of power generation within the Tema industrial enclave.

“Ghana over the period has experienced, huge amounts of transmission losses and at the present power too as a result of obsolete equipment’s across the country. While efforts are being made to restore and sustain financial viability of the sector, this project is in line with the policy objective to encourage both private and public investment in the power sector,” he said.

It’s an innovation and I want to use this opportunity to call on all other players to learn from the GRIDCo-Asogli experience. The project was born out of necessity and rapid development of power generation within Tema industrial enclave which has its challenges. A lot of interventions has been put in place to alleviate the congestion and this project is one of such intervention,” he added.

The Minister further noted that to safeguard consistent power supply, the Electricity Company of Ghana (ECG) and the Northern Electricity Distribution Company (NEDCO) had also embarked on a programme to replace their obsolete equipment to enhance their distribution of power.

He called for assistance from all customers who, he said, would experience outages from time to time during the period of replacement since the project was in their interest.

The power plant, which came online in 2010, is privately owned by Sunon Asogli Power (Ghana) Limited’, a company in which Shenzhan Energy Group Limited maintains 60% shareholding and the remaining 40% is owned by China Africa Development Fund.


GROW YOUR BUSINESS
Post Ads on GhanaBusiness.Net, Promote your own Products, Business or Services.
It's Free. It's takes seconds to Reach 50,000 Visitors a Day
151
SHARES
ShareTweetLinkedinPinterestWhatsappTelegram

How To Build A Multi Million Dollar Online Business In Nigeria

How to Sell Anything to Anyone by Telling Great Stories

Top 15 Businesses That Make The Most Millionaires

Americans Are Getting Richer…Kind Of

Top
Hello!
Get exclusive tips on latest resources to help you grow your business. No spam, just valuable content.
Sign Up For Our Weekly Newsletter Today!
Give it a try, you can unsubscribe anytime
Close
Follow us

GROW YOUR BUSINESS
Post Ads on GhanaBusiness.Net, Promote your own Products, Business or Services.
It's Free. It's takes seconds to Reach 50,000 Visitors a Day
Forgot Your Password ?