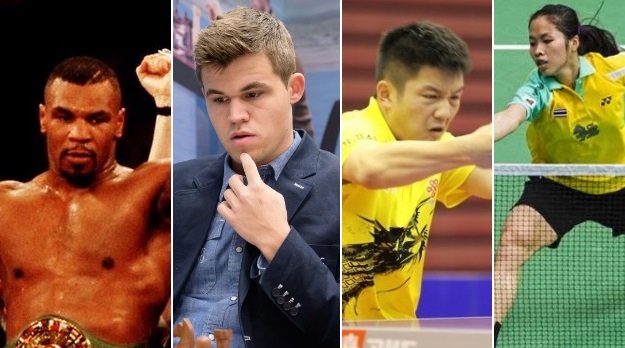 Youngest World Champions Across Different Sports. Every athlete and sportsman starts his career with the aspiration of achieving the ultimate glory, becoming the best in their sport. A great many of the youngsters who start their career with these aspirations end up with these aspirations remaining unfulfilled in their hearts. But there are few who were so naturally gifted that becoming the best at their sport didn’t require years of grinding. Let us see the list of those players who became youngest world champions in their respective individual sports.

The man revolutionized the way Surfing as a sport is viewed by people. With 11 World Titles and 54 World Championship Tour Victories, this legend can rightly be coined as the Michael Jordon of Surfing. He had developed a niche for himself as one of the finest surfers at international level at a very tender age and went on to become the youngest world champion ever by winning the world title at the age of 20. It is an interesting fact that Kelly also happens to be the oldest guy to have won the title. He won it at the age of 39. Often his name gets called whenever there is a debate about naming the world’s greatest surfer.

Member of International Boxing Hall of Fame and World Boxing Hall of Fame, Mike Tyson became the youngest World Heavy Weight Champion after he knocked out Trevor Berbick in 1986 in his first title fight at the age of 20. What ensued was a tremendous career marred by controversy and allegations. Tyson is regarded as one of the all-time greats in the sport. One incident which really didn’t go down well with his fans and haters alike was when he attacked an opponent’s ear in a match.

When it comes to swimming, not many people can think across Michael Phelps and his astounding achievements but one legend swimmer is Ian Thorpe. The most successful athlete at the 2000 Summer Olympics, Ian Thorpe has won 5 Olympic Medals, the most for an Australian. He became the youngest ever male to represent Australia when he was 14 and became the youngest ever individual male World Champion when aced the 400 meter freestyle at the 1998 Perth World Championships. His meteoric swimming speed earned him the name “Thorpedo”.

17 years old and he had already won a grand slam. Michael Chang, considered as one of the best defensive baseliners, is the youngest player in Tennis to have won a Grand Slam singles title. He won French Open in 1989 when he was few months older than 17 years. Tennis fans today might know everything about the likes of Nadal and Federer but it is important that immensely players like Chang remain alive in the history of the sport.

Once a child prodigy, Magnus Carlsen won the throne of chess’s world at the age of 19 years and became the youngest player to have ever enjoyed FIDE’s number one ranking. His reign remains supreme these days as he is still to be dismounted from this position. Magnus has remained very active in development of e-games for new chess players. This year, Magnus, a movie named after him will adorn the cinema screens.

No club is considered complete without a snooker table in it. Yet the sport hasn’t quite achieved the fame to give competition to other sports with balls. Our lad here, Stephen Hendry, a former Scottish legend, who is generally regarded as the greatest snooker player to have ever played the game, became the youngest ever Snooker World champion in 1990 at the age of twenty one. He won the championship seven times in his career and reigned the snooker rankings for 8 consecutive years from 1990 to 1998.

All the golf players that I know at personal level, started playing the game whence the retirement date started becoming clearer to them. Isn’t that how this sport gets depicted in the movies as well? As a sport that can be enjoyed by old lads only? With Tiger Woods and other young golfers in the arena, the trend started shifting towards the younger player and with so much money involved in the major championships we are seeing increased interest from youngsters of all ages in this sport.

Young Tom Morris was one of the pioneer professional golfers of Scottish origin who won his first major at the tender age of 17 in 1868. If that was not enough, Morris went to create a winning a streak by winning the next three consecutive majors as well. So at the age of 21, Morris had won 4 Open Championships, a record which is yet to be equaled.

No surprises here that the youngest world champion in Table Tennis belongs from China. The game owes its existence to the Chinese but this young guy is taking the sport to a whole new level with his exuberance. He was already the youngest member of Chinese Table Tennis Team and youngest World Tour Champion. But that wasn’t enough for this mercuric young player who became the youngest World Champion at the age of 17 years and 103 days by surpassing Ma Long.

By the year 2013, Ratchanok had already amassed a host of titles under her belt but one title which still evaded her was the World Champion. In August 2013, she defeated the World Number 1 and Olympic Gold Medalist, Li Xuerui and became the youngest ever World Champion at the age of 18.