…
For a better experience please change your browser to CHROME, FIREFOX, OPERA or Internet Explorer.

We love initiatives in Africa that instead of focusing on dead aid, aim to help people out of poverty with trade aid. This is one we stumbled on recently. Enjoy!

Using fashion to empower women in Uganda, Sseko Designs is a fashion company that understands how to do well by doing good.

Founded in 2009, Portland, Oregon-based Sseko (derived from the Lugandan word enseko, which means “laughter”) empowers poor but academically gifted women in northern Uganda to earn income to pay for a college education. The organization hires young women for nine months—during a traditional gap between high school and college—to make sandals, requiring that they save 50 percent of their earnings.

At the end of each term, Sseko grants college scholarships, matching up to 100 percent of the savings each woman earns. It’s enough to pay the $2,000 to $3,000 tuition for the first year of a two-year university program, setting them up for a brighter future. 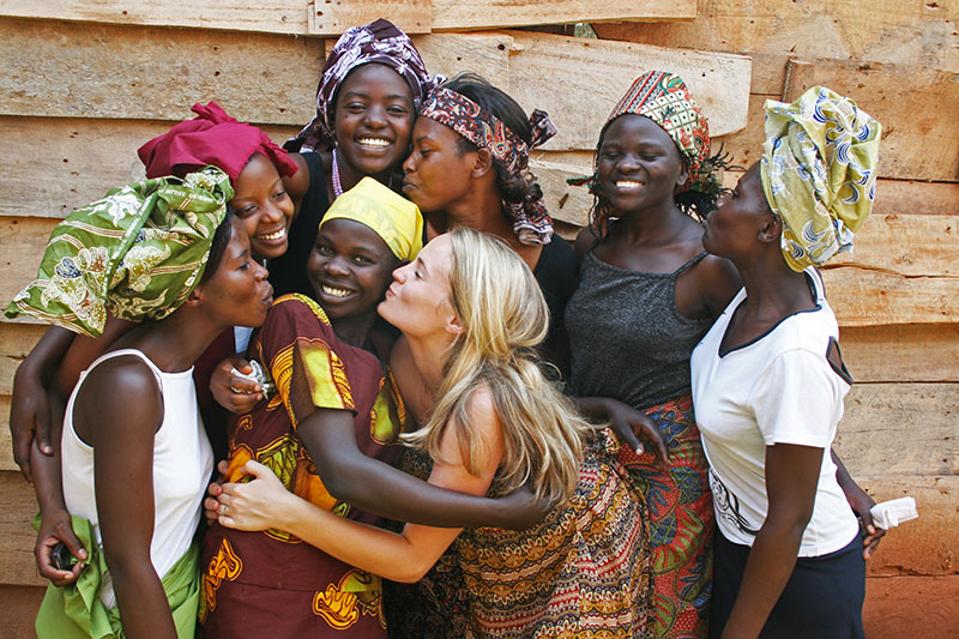 Sseko founder Liz Forkin Bohannon had no plans to be an entrepreneur. She refused to study business in college, much to her father’s chagrin. And after only a couple of months in her first corporate job in 2008, Bohannon ditched her cubicle and bought a one-way ticket to East Africa.

“I wanted to be a rogue, fearless journalist and travel to the most dangerous places in the world and tell the stories that needed to be told about women and girls,” she says.

Bohannon ended up in northern Uganda, volunteering at a college-prep school for poor but academically gifted women. She saw that although many women were admitted to a university, they weren’t able to earn income to pay for their education. Unemployment in the region tops 80 percent, and the jobs that are available are typically given to men.

“Most of these women are the first of their entire villages to go to university,” Bohannon says, “and they don’t have any work or social support.”

Finding a way to help Ugandan women afford a university education wasn’t easy. Before founding Sseko, Bohannon’s first thought was to start a nonprofit, but friends in Uganda suggested something more sustainable to help women break the cycle of poverty. She started a chicken farm, but prices were low and the microbusiness simply wasn’t scalable. “It failed pretty quickly,” she says.

Realizing she needed to sell higher-priced products—and build a sustainable industry for employing women—Bohannon turned to fashion. She re-created a sandal she designed in college using locally sourced leather from East Africa for the soles and brightly colored ribbons as interchangeable straps. She hired women in Uganda to make the designs.

Bohannon had to focus on both her mission and her business when creating Sseko. She aligned the two objectives by building every part of her company around her goal of creating jobs for women.

“She is giving these women the opportunity to not only have a job, but to have a meaningful way to contribute to their own future,” says Michele Markey, who wrote about Sseko in her book SheVenture, about strategies for female entrepreneurs.

Bohannon launched Sseko with a bold promise to her first three hires, Mary, Mercy and Rebecca. “I said, ‘If you make the sandals for the next nine months, I promise you will go to university in the fall,’” she recalls.

She emptied her bank account—mainly savings from babysitting and nanny jobs—to buy supplies. Then Bohannon went back to the U.S., where she could sell the sandals, which retail for about $55 a pair. She also married her husband, Ben Bohannon, who left his job in the tech industry to help her run Sseko.

As promised, Bohannon did send Mary, Mercy and Rebecca to university and, so far, 44 more women after them. Mary and Mercy graduated from Makerere University in Kampala, the Ugandan capital. Mary earned a degree in social development, while Mercy studied information technology. Rebecca graduated from Uganda Christian University in Mukono, not far outside Kampala, where she studied social work and public administration.

Today, Sseko predicts it will earn more than $1 million in revenue in 2015, has deals with about 500 independent distributors and was recently featured on Shark Tank, a TV show on which entrepreneurs pitch their companies to high-profile investors.

Sseko didn’t land a shark—none of the investors gave funds to the company—but it separately closed a $750,000 round of funding and gained plenty of publicity in the process. Along the way, Bohannon also learned that she’s an entrepreneur after all.

“She realized that capitalism is not bad and that by generating money, you can do good in the world,” Markey says.

To build a bigger market, Bohannon is broadening Sseko’s product line to include closed-toe shoes, handbags, totes and other locally made accessories.

Realizing she couldn’t lose 100 percent of her employees every nine months, Bohannon also hired a veteran team of older women as permanent employees. Sseko now employs about 25 permanent workers and 25 students. The company helps each employee get a bank account—often denied to women in Uganda—and provides a social-impact program that teaches women about personal finance.

Despite the power of Sseko’s story, the product has to come first, Bohannon said. The flip side is that capitalism also creates more accountability and efficiency, enabling Sseko to have a bigger impact.

In case you missed it
101 Ways To Make Money in Africa – Business Ideas and Success Stories That Will Inspire the Entrepreneur in You!

Via Forbes.com, by Lisa Wirthman.


GROW YOUR BUSINESS
Post Ads on GhanaBusiness.Net, Promote your own Products, Business or Services.
It's Free. It's takes seconds to Reach 50,000 Visitors a Day
131
SHARES
ShareTweetLinkedinPinterestWhatsappTelegram

How To Build A Multi Million Dollar Online Business In Nigeria

How to Sell Anything to Anyone by Telling Great Stories

Top 15 Businesses That Make The Most Millionaires

Americans Are Getting Richer…Kind Of

Top
Hello!
Get exclusive tips on latest resources to help you grow your business. No spam, just valuable content.
Sign Up For Our Weekly Newsletter Today!
Give it a try, you can unsubscribe anytime
Close
Follow us

GROW YOUR BUSINESS
Post Ads on GhanaBusiness.Net, Promote your own Products, Business or Services.
It's Free. It's takes seconds to Reach 50,000 Visitors a Day
Forgot Your Password ?