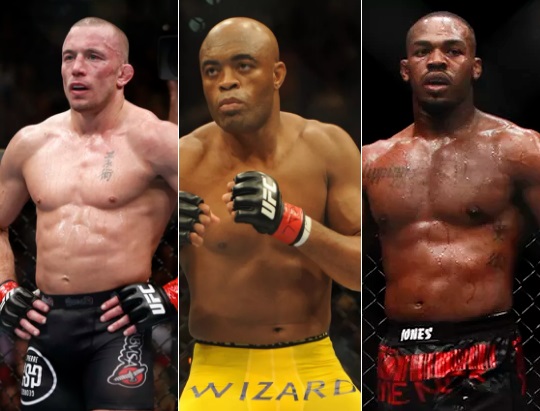 Most Successful MMA Fighters Of All-Times. Mixed Martial Arts as a sport has come along way in last couple of decades largely down to UFC getting the status of main stream sport in major countries. We already had some of the finest MMA fighters in the short professional history of the sport and we take indepth look at top 10 greatest MMA fighters so far.

Most Successful MMA Fighters Of All-Times

We have considered the following factors before putting this list together. 1)Longevity at the top 2) Head-to-head results 3). quality of opposition fought 4) weight Division strength.

Georges St. Pierre is widely regarded as the best MMA fighter of all times having recorded 25 wins including longest winning streak of 12 fights from 2007 to 2013. He is also two time welterweight champion and was named Canadian athlete of the year three times in a row between 2008 to 2010. FightMatrix (Computerized MMA Rankings) list him as ultimate all time greatest MMA fighter and rightly so as nobody has ever come anywhere close to the consistency Georges St. Pierre has showed in his illustrious career.

When the debate about the greatest MMA fighters comes the argument is usually between the two fighters, Georges St. Pierre or Anderson Silva. Brazilian has been top draw in UFC since his very early days and he hold the record of longest title rign as UFC Middleweight champions with 16 fights including 10 title defenses. He took a break from UFC but return a year later and since than his record has been mixed. Suffered a horrific broken leg and also induced in drug controversies in the later part of his career.

Currently the best fighter on the UFC roster and light heavyweight champion. Jon Jones is widely regarded one of the top three MMA fighters of all times. He also set the record of youngest UFC champion. Jon Jones has incredible record of (22 wins and 1 defeat) including his current 13 fight winning streak. He has been ranked pound for pound best MMA fighter of number of years now. By the end of his career he might overtake both Georges St. Pierre and Anderson Silva as the greatest of all times.

Named as UFC fighter of the year in 2009 he went 18 fight winning streak before Conor McGregor finally ended his reign as featherweight champion back in 2015.

Hails from Russia, Fedor Emelianenko has been a top MMA fighter for most of his career since turning pro back in 2000. He won 36 fights and only suffered three defeats in what was a very successful MMA/UFC career for the man also known as the last emperor.

Another american with a great MMA career, Matt Hughes had one of the most extensive mixed martial arts career with over 54 professional fights where he won 45 and lost 9. At the peak of his career he went on to defend UFC walterweight title for record 7 times and ranked no.1 pound for pound fighter for most of his career

Gold medal winner in Jiu-Jitsu world championship, BJ Penn went on to unify UFC lightweight championship before going on to break alltime lightweight title defense record. Although his career has record does not show how good he was, at the peak of his career he was regarded as best pound for pound fighter in the world.

Came into UFC with the background in wrestling and collegiate, Randy Couture went on to win the heavyweight title three times and also won the light-weight title twice.

Currently ranked as #2 best featherweight fighter in UFC, Frankie Edgar has come along way since making his debut back in 2005. He went on to become UFC light-weight champion and recorded some notable wins against the likes of Hermes França, BJ Penn and Sean Shrek.