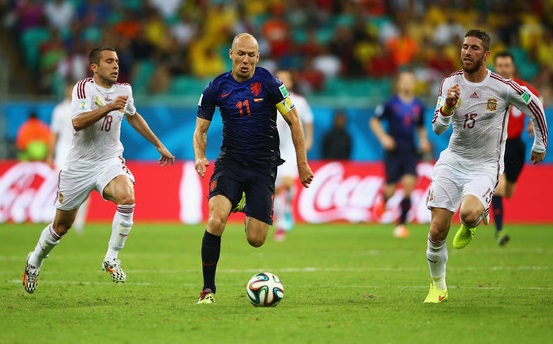 Fastest Football Players In The World. Its just in recent times when FIFA and other leagues started collecting physical statistical data of players around the world. FIFA conducted a survey during 2014 World Cup in Brazil where they monitored players pace throughout the competition and it was revealed that Arjan Robben cloaked around 37kmh during the group game against Spain.

Fastest Football Players In The World

That is widely regarded as the fastest speed record of a footballer since such data collection started. Now players speed and performance is often monitored in top european leagues and below is the list top 15 fastest footballers around the world according to official sources such as FIFA, PremierLeague and Opta.

Arjan Robben tore Spain’s defense apart during 2014 world cup group game where Holland beat Spain by 5-1, he reached top speed of 37 kilometer per hour when he sprint pass Ramos and Jordi Alba to score his second and Holland’s fifth of the day. It is regarded as the fastest sprint recorded by a footballer player since FIFA and other competitions started recording such physical statistics.

Southampton’s Shane Long hit the 35.3 km/h mark in the premier league game highest in England. Australian born Mathew Leckie also made the headlines in Germany when Opta revealed his sprint (35.18kmh) against Stuttgart to be fastest ever recorded in Bundesliga. In Spain just recently La Liga and Opta started collecting such data so not much info is available there but according to “Marca” Gareth Bale’s run against Barcelona in Copa Del Rey final was cloaked at 34.9 km/h. Olympic gold medalist and sprint champion Usain Bolt can cloak upto 44.64 km/h at his peak.

The numbers and following tables are official statistics from FIFA, Premier League and La Liga. No other major competition or league reveal such statistics. Premier League stats provided by “OPTA”.

According to player physical performance statistics in La Liga published by “Marca” Gareth Bale’s 34.7 km/h top speed during that famous sprint against Barcelona resulted in goal was the fastest recorded by any player in Spain.

Remember that famous Gareth Bale goal against Barcelona ? He recorded a massive 34.7 km/h top speed in that sprint.